"I try to apply colors like words that shape poems, like notes that shape music. " Joan Miro 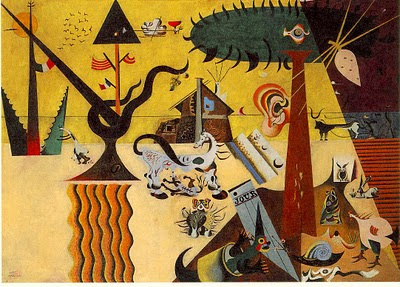 During the summer of 1923 Joan Miró began painting The Tilled Field, a view of his family’s farm in Montroig, Catalonia. Although thematically related to his earlier quasi-realistic, Fauvist-colored rural views, such as Prades, The Village, this painting is the first example of Miró’s Surrealist vision. Its fanciful juxtaposition of human, animal, and vegetal forms and its array of schematized creatures constitute a realm visible only to the mind’s eye, and reveal the great range of Miró’s imagination. While working on the painting he wrote, “I have managed to escape into the absolute of nature.” The Tilled Field is thus a poetic metaphor that expresses Miró's idyllic conception of his homeland, where, he said, he could not “conceive of the wrongdoings of mankind.”

The complex iconography of The Tilled Field has myriad sources, and attests to Miró’s long-standing interest in his artistic heritage. The muted, contrasting tones of the painting recall the colors of Catalan Romanesque frescoes, while the overt flatness of the painting—space is suggested by three horizontal bands indicating sky, sea, and earth—and the decorative scattering of multicolored animals throughout were most likely inspired by medieval Spanish tapestries. These lively creatures are themselves derived from Catalan ceramics, which Miró collected and kept in his studio. The stylized figure with a plow has its source in the prehistoric cave paintings of Altamira, which Miró knew well. Even the enormous eye peering through the foliage of the pine tree, and the eye-covered pine cone beneath it, can be traced to examples of early Christian art, in which the wings of angels were bedecked with many tiny eyes. Miró found something alive and magical in all things: the gigantic ear affixed to the trunk of the tree, for example, reflects his belief that every object contains a living soul.

Miró’s spirited depiction of The Tilled Field also has political content. The three flags—French, Catalan, and Spanish—refer to Catalonia’s attempts to secede from the central Spanish government. Primo de Rivera, who assumed Spain’s dictatorship in 1923, instituted strict measures, such as banning the Catalan language and flag, to repress Catalan separatism. By depicting the Catalan and French flags together, across the border post from the Spanish flag, Miró announced his allegiance to the Catalan cause. 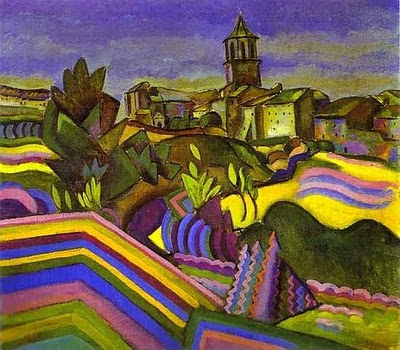 "True realism consists in revealing the surprising things which habit keeps covered and prevents us from seeing." Jean Cocteau 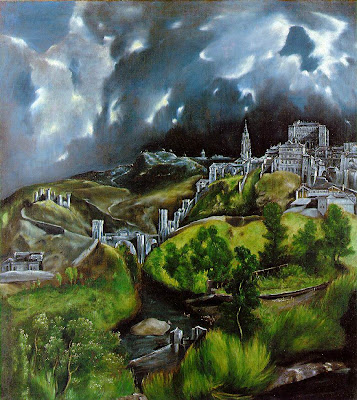 El Greco has a style which is quite unique in European painting: a strange combination of the expressive power of Italian Mannerism but illuminated by a mystical light and colour that reflects the artist's intense spiritual fervour.

Toledo was the religious capital of Spain and El Greco's 'View of Toledo' is a landscape painting with a spiritual dimension. He chooses to portray the scene just at that moment before a storm bursts. The heavens are at war with the sun just holding out against the impending thunderstorm and the atmosphere is electric. The spire of Toledo Cathedral seems to conduct this energy to the surrounding buildings while the landscape bristles with static charge. At this portentous moment the voice of God speaks through the forces of nature. It is an apocalyptic scene which recalls St. John's vision of the New Jerusalem in the Book of Revelations, 'He showed me Jerusalem, the Holy City, coming out of Heaven from God and shining with the glory of God. The city shone like a precious stone, like a jasper, clear as crystal.'

This is a landscape of unearthly power and drama: a dialogue between heaven and earth conducted appropriately by the cathedral spire. In fact, El Greco has changed the actual positions of the cathedral and the Alcázar palace to increase the effectiveness of his composition.

El Greco's fame faded after his death until he was 'rediscovered' at the end of the 19th and start of the 20th century. Paul Cézanne, Pablo Picasso and the German Expressionists were attracted by the expressive distortions of form and colour in his painting. Picasso acknowledged this debt in his painting 'Les Demoiselles d'Avignon' which has many compositional similarities to El Greco's 'Opening of the Fifth Seal' (1608-1614). This late El Greco masterpiece was owned by Picasso's friend, Ignacio Zuloaga, and at the time when Picasso was painting 'Les Demoiselles' he often visited Zuloaga to view the work.

Franz Marc, one of the most renowned expressionists, said, 'the glory of this painter is closely tied to the evolution of our new perceptions on art.' El Greco was not simply an old master; he was an artist from the past whose ideas were three hundred years ahead of their time.

text taken from www.artyfactory.com
Posted by Liam at 09:40 No comments: