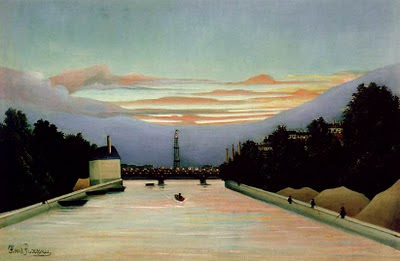 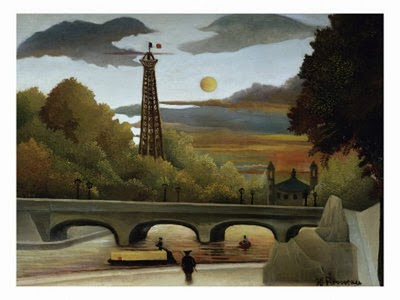 At his funeral, seven friends stood at his grave in the Cimetière de Bagneux: the painters Paul Signac and Manuel Ortiz de Zárate, the artist couple Robert Delaunay and Sonia Terk, the sculptor Brancusi, Rousseau's landlord Armand Queval and Guillaume Apollinaire who wrote the epitaph Brancusi put on the tombstone:

We salute you Gentle Rousseau you can hear us.
Delaunay, his wife, Monsieur Queval and myself.
Let our luggage pass duty free through the gates of heaven.
We will bring you brushes paints and canvas.
That you may spend your sacred leisure in the
light and Truth of Painting.
As you once did my portrait facing the stars, lion and the gypsy
Posted by Liam at 08:16 No comments:

Schiele's work is noted for its intensity, and the many self-portraits the artist produced. The twisted body shapes and the expressive line that characterize Schiele's paintings and drawings mark the artist as an early exponent of Expressionism, although still strongly associated with the art nouveau movement (Jugendstil).

In 1914, Schiele glimpsed the sisters Edith and Adéle Harms, who lived with their parents across the street from his studio in the Viennese suburb of Hietzing, 101 Hietzinger Hauptstrasse. They were a middle-class family and Protestant by faith; their father was a master locksmith. In 1915, Schiele chose to marry the more socially acceptable Edith, but had apparently expected to maintain a relationship with Wally. However, when he explained the situation to Wally, she left him immediately and never saw him again. This abandonment lead him to paint Death and the Maiden, where Wally's portrait is based on a previous pairing, but Schiele's is newly struck. (In February 1915, Schiele wrote a note to his friend Arthur Roessler stating: "I intend to get married, advantageously, perhaps not to Wally.") Despite some opposition from the Harms family, Schiele and Edith were married on 17 June 1915, the anniversary of the wedding of Schiele's parents. 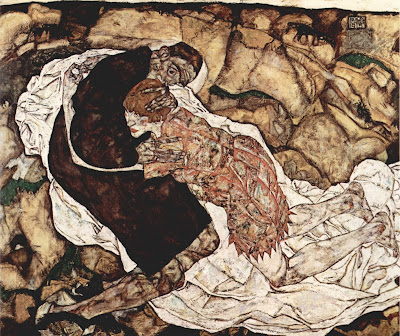 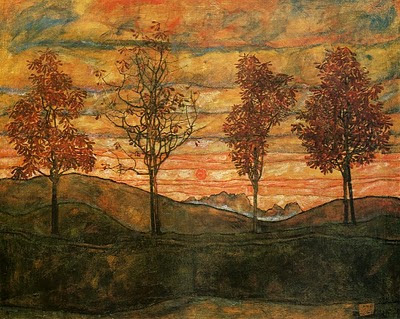 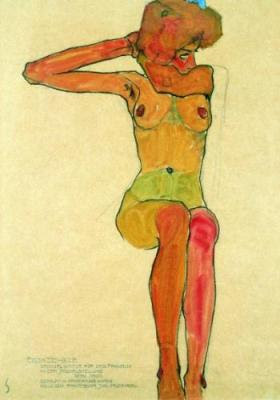 Werner Herzog is a plastic bag

Excellent short film by Ramin Bahrani for FUTURESTATES
Posted by Liam at 07:57 No comments:


Caillebotte's style belongs to the School of Realism but was strongly influenced by his Impressionist associates. In common with his precursors, Jean-Francois Millet and Gustave Courbet, as well his contemporary Degas, Caillebotte aimed to paint reality as it existed and as he saw it, hoping to reduce painting's inherent theatricality. Perhaps because of his close relationship with so many of his peers, his style and technique varies considerably among his works, as if “borrowing” and experimenting, but not really sticking to any one style. At times, he seems very much in the Degas camp of rich-colored realism (especially his interior scenes) and at other times, he shares the Impressionists' commitment to "optical truth" and employs an impressionistic pastel-softness and loose brush strokes most similar to Renoir and Pissarro, though with a less vibrant palette.

With an almost photograhic feel, it seems to me that the main focus is of the main in the centre with his head down approaching the curb. This is achieved without putting the main figures completely out of focus but just enough to allow the eye to drift over them.
Posted by Liam at 07:44 No comments:

Following on from yesterday's post on Henri Toulouse-Lautrec here's Modigliani, i came across him through the potrait he'd painted of the godlike Blaise Cendrars, and in doing so found this portrait of Maude Abrantes, which is exceptional, the way he captures the tired hazy absinsth induced stupor that she submits herself to is quite spectacular. 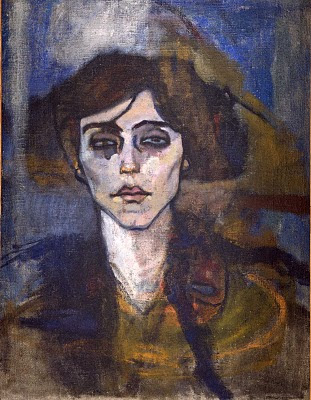 During the 1920s, in the wake of Modigliani's career and spurred on by comments by André Salmon crediting hashish and absinthe with the genesis of Modigliani's style, many hopefuls tried to emulate his "success" by embarking on a path of substance abuse and bohemian excess. Salmon claimed—erroneously—that whereas Modigliani was a totally pedestrian artist when sober,

“ ...from the day that he abandoned himself to certain forms of debauchery, an unexpected light came upon him, transforming his art. From that day on, he became one who must be counted among the masters of living art.[14] ”

While this propaganda served as a rallying cry to those with a romantic longing to be a tragic, doomed artist, these strategies did not produce unique artistic insights or techniques in those who did not already have them.

In fact, art historians suggest[14] that it is entirely possible for Modigliani to have achieved even greater artistic heights had he not been immured in, and destroyed by, his own self-indulgences. We can only speculate what he might have accomplished had he emerged intact from his self-destructive explorations.

Here is the portrait he did of Blaise Cendrars 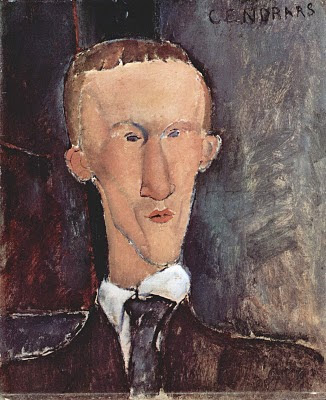 Henri Toulouse-Lautrec - Self Portrait in crowd, at the Moulin Rouge

He may be considered a drunk and a martyr and thought of most fondly for his iconic Moulin Rouge Posters, but Henri Toulouse-Lautric was also a painter of real brilliance, upon seeing his 'self portrait in crowd...' it is difficult for it to not take an effect, the saturated colours, the shadow, the perspective and the real emotion visible on the faces of the crowd. I believe it to be Lautrec sat with the beard at the main table.

Self Portrait in the crowd, at the Moulin Rouge 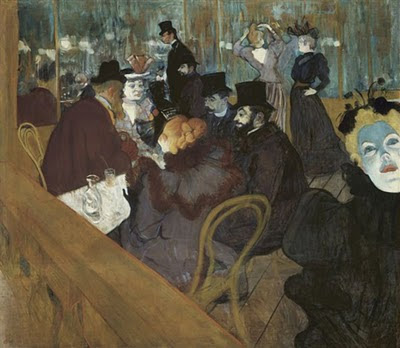 At the Cirque Fernando - this painting really reminds me of the the Circus by George Seurat, the horse and rider seem to be almost carbon copies of each other, I believe Lautrec created his first. 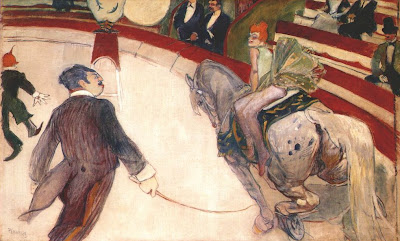 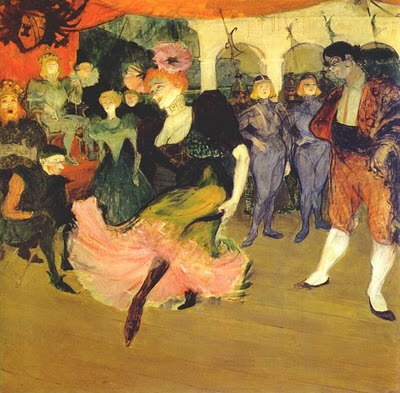 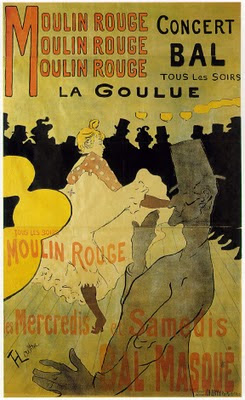 bio from Wikipedia
Henri Marie Raymond de Toulouse-Lautrec-Monfa or simply Henri de Toulouse-Lautrec (French pronunciation: [ɑ̃ʁi də tuluz loˈtʁɛk]) (24 November 1864 – 9 September 1901) was a French painter, printmaker, draughtsman, and illustrator, whose immersion in the colourful and theatrical life of fin de siècle Paris yielded an œuvre of exciting, elegant and provocative images of the modern and sometimes decadent life of those times. Toulouse-Lautrec is known along with Cézanne, Van Gogh, and Gauguin as one of the greatest painters of the Post-Impressionist period. In a 2005 auction at Christie's auction house a new record was set when "La blanchisseuse", an early painting of a young laundress, sold for $22.4 million U.S.
Posted by Liam at 07:45 1 comment: 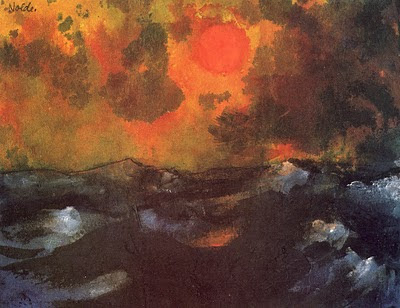 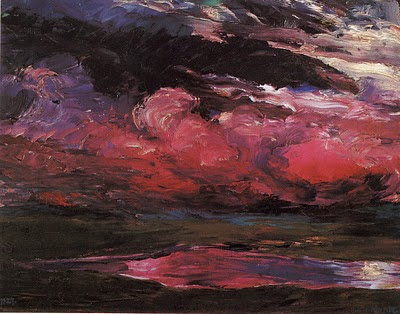 Not sure of the title of this... 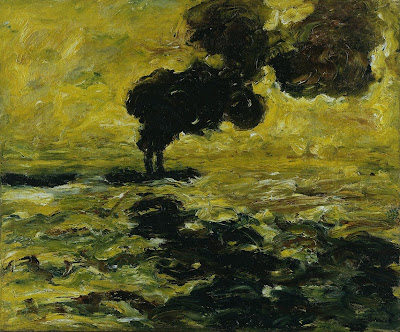 ”….Nolde sees the Sea devoid of any reference to man, eternally in motion, ever changing….” Max Sauerlandt,

see more here...panathinaeos.wordpress.com
Posted by Liam at 17:32 No comments: