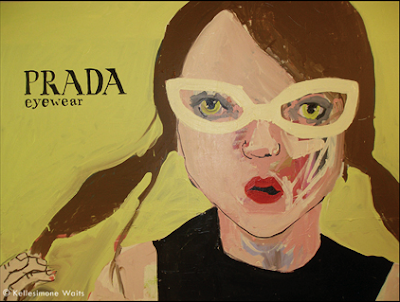 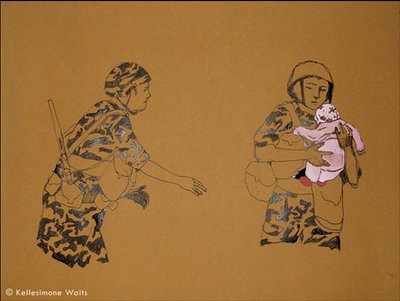 : a natural process that results in the survival and reproductive success of individuals or groups best adjusted to their environment and that leads to the perpetuation of genetic qualities best suited to that particular environment

I am frequently asked when I started painting. It's one of those stock cocktail party questions that follow on the heels of the given opener: "So, what do you do?" I only came up with a good answer (which also happens to be true) a couple of years ago:

When I was five years old.

I had the natural five-year-old girl fascination with pretty glamorous ladies (this hasn't changed much). I distinctly remember my frustration with my limitations as a painter at the time (this also hasn't changed much). It was from this place of frustration that I solved my first problem with a paintbrush. I discovered that I could piece together what I could do to make something I wanted to see. My equation became:

I'd then add features and some noodley arms and hair. Directly following this discovery I had the covetous instinct to keep what I had uncovered secret from my peers. It was mine, I was proud, and I was hooked.

In 2005, at 21, I participated in my first gallery show. Just weeks before the show opened I had unknowingly completed my first body of work that followed a cohesive conceptual topic. I say unknowingly because it was just that. I had no clue what I was painting about, but I was painting it over and over again. It wasn't until after that show had come and gone and I had some distance from the work that the story of the work became clear.

In the years following that first show I became infatuated with concept. Infatuation morphed into dependence, as it's been known to do, and about a year ago I realized that I had hit a wall. I couldn't paint with out a concrete concept and once I began work on a specific chosen topic I couldn't permit my self to veer off course. I was frustrated with my limitations, much like that time when I was five, except now my limitations were self imposed rather than natural.

This current body of work is a narrative survey of personal attraction and interpretation through media immersion. Though the selected works do, at first glance, appear to be an incongruous mash-up of unrelated topics, what I see is in actuality the result of my personal picture making evolution. With a melting pot of media imagery as my source materials (ranging from "National Geographic" to "Vogue") I have selected only a handful of images. Much like the process of Natural Selection, my own process in selecting my subject matter was a natural one based on my personal history that resulted in the survival and reproductive success of particular imagery that was best adjusted to my environment. By selecting particular images and then choosing to paint them I have altered their life spans to exceed the average shelf life of a magazine, and in turn ensured their survival (if only in my own world).
Posted by Liam at 08:15