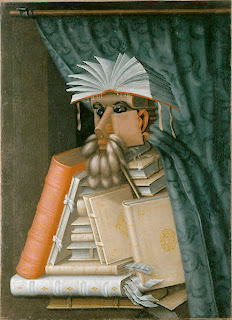 Following on from our previous 'book of the week' post, is an example of the amazingly interesting paintings from Arcimboldo.

The bizarre works of Arcimboldo, especially his multiple images were rediscovered in the early 20th century by Surrealist artists like Salvidor Dali. The “The Arcimboldo Effect” exhibition at the Palazzo Grassi in Venice (1987) included numerous 'double meaning' paintings. Arcimboldo's influence can also be seen in the work of Shigeo Fukuda, Istvan Orosz, Octavio Ocampo, and Sandro del Prete, as well as the films of Jan Švankmajer.

His painting, Water, was used as the cover of the album Masque by the progressive rock band Kansas. The 'soup genie' character Boldo in the 2008 animated film The Tale of Despereaux, is composed of vegetables.

(For full gallery and more information click the image)
Posted by Tony Harewood at 16:46