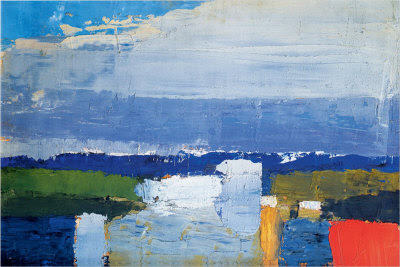 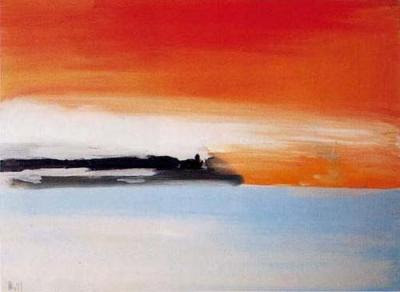 De Staël's painting career spans roughly 15 years (from 1940) and produced more than a thousand paintings. His work shows the influence of Gustave Courbet, Paul Cézanne, Henri Matisse, Pablo Picasso (especially Picasso in his Blue and Rose periods), Georges Braque, Fernand Léger and Chaim Soutine, as well as of the Dutch masters Rembrandt, Vermeer and Hercules Seghers. During the 1940s and beginning in representation (especially landscapes, but also still lifes, and portraits), de Staël moved further and further toward abstraction. Evolving his own highly distinctive and abstract style, which bears comparison with the near-contemporary American Abstract Expressionist movement, and French Tachisme, but which he developed independently of them. Typically his paintings contained block-like slabs of colour, emerging as if struggling against one another across the surface of the image.

De Staël 's work was quickly recognised within the post-war art world, and he became one of the most influential artists of the 1950s. However, he moved away from abstraction in his later paintings, seeking a more "French" lyrical style, returning to representation (seascapes, footballers, jazz musicians, seagulls) at the end of his life. His return to imagery during the early 1950s can be seen as an influential precedent for the American Bay Area Figurative Movement, as many of those abstract painters made a similar move; returning to imagery during the mid-1950s. His painting style is characterized by a thick impasto showing traces of the brush and the palette knife, and by a division of the canvas into numerous zones of color (especially blues, reds and whites). His most well-known late paintings of beaches and landscapes are dominated by the sky and effects of light.

Much of de Staël 's late work - in particular his thinned, and diluted oil on canvas abstract landscapes of the mid-1950s predicts Color field painting and Lyrical Abstraction of the 1960s and 1970s. Nicolas de Staël 's bold and intensely vivid color in his last paintings predict the direction of much of contemporary painting that came after him including Pop Art of the 1960s.

from wikipedia
Posted by Liam at 13:36